Although it's almost a year ago, you might find the Ubuntu Live 2007 clips interesting if you missed it. Personally, I'm really looking forward to the next Ubuntu Live.

As founder of the Ubuntu project, Mark Shuttleworth will give an overview of Ubuntu today: an emerging force in the consumer, developer, and server platform marketplace. He will introduce some key themes for the conference, as well as the keynote speakers who will map out the Ubuntu universe and broader free software trends in more detail. This conference brings together people using Ubuntu in a wide variety of environments -- from large-scale corporate infrastructures, to government deployments across thousands of schools, on hardware that ranges from thin clients and mobile internet tablets to massively multicore servers. Shuttleworth will chart the planned course of Ubuntu over the next 12 months, including their commitment to deliver another LTS (Long Term Support) release.

Also, check out Ubuntu Live 2008:
http://en.oreilly.com/ubuntu2008/public/content/home
Posted by MadsRH at 9:52 AM No comments:

I'm working on some posters for the danish Ubuntu 8.04 release party in Aarhus and I've made a few suggestions, that I want to share with you. I really hope that my artwork will be selected to promote the release party, but the decision is not mine to make. 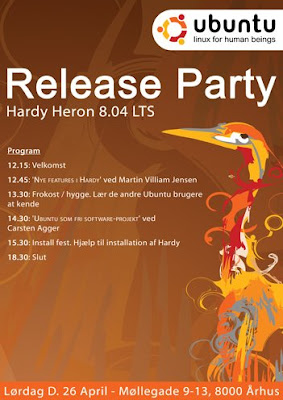 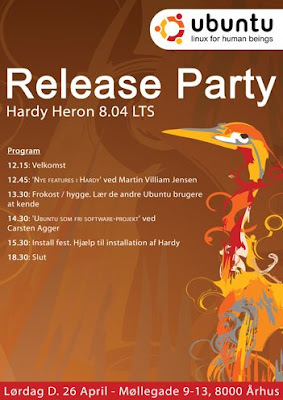 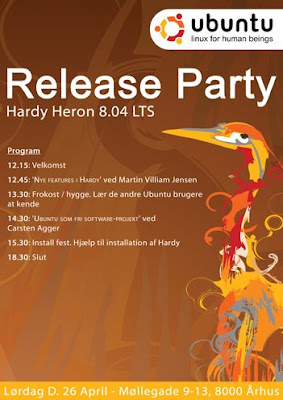 And here is the first web banner for the release. I think it could work better if it was animated, I will be working on a new version using Flash.

Idea description:
The idea is for a very simple and user-friendly program, which provides the user with an up-to-date list of pre-released (alpha, beta, release candidate…) versions of Ubuntu. The user then chooses a version, for instance Hardy Heron Alpha 6, and the program sets up the partitions needed and installs the selected (ISO) data on the users USB flash drive. Now the user can boot up on the USB flash drive and install the selected release as if it was from a CD. Afterwards the user can erase the data from the flash drive by clicking the “remove data” button inside the program.
Reason:
1. The short release cycle in Ubuntu (and many other distributions), means that every six months, many people download the Alpha 1, 2, 3…, Beta, Release candidate and at last the final release. That’s a lot of CD’s being burned, and when the release you downloaded is outdated, you properly won’t use the CD again. Linux is actually quite eco-friendly (http://www.whylinuxisbetter.net/items/environment/index.php?lang=), but this program could provide a way to reduce the amount of CD’s ending up in the trash bin.

2. This program would also provide a tool, that would easily make users able to carry a portable Linux version (and their portable desktop) around with them on their USB flash drive.
Contribute:
Please comment on this project! If you want to help out (especially programmers) please let me know.
Links:
Below is a guide to install, boot and run Ubuntu 7.10 from a flash drive. It seems kind of difficulty, especially for beginners, compared to how I imagine this program would work.
http://www.pendrivelinux.com/2007/09/28/usb-ubuntu-710-gutsy-gibbon-install/
Posted by MadsRH at 9:21 PM No comments:

The idea behind the project Ubuntu Live Stats, is to reflect the enormous activity Ubuntu has on all fronts. The site is constantly updated and presents you with an overview of the latest activity related to Ubuntu. Now you can easily keep track of bugs, forum topics, security fixes and of course latest news.

A lot of Windows users haven't tried running Linux, because it seems to difficult or intimidating. Ubuntu now provides the opportunity of installing Ubuntu from within Windows. The tool is called Wubi and it eliminates all the challenges associated with the installation and makes it possible for practically anybody to try Ubuntu in a dual-boot configuration, without any risk or major commitment.
The installation works just like any other Windows program installation and it even sets up a boot menu so that users can choose between Windows and Ubuntu when the computer starts. Wubi does not require users to create a partition on their hard drives. With Wubi you can uninstalled Ubuntu directly from the Add/Remove Programs utility in Windows.

If you wanted to try Linux, but you were afraid - this tool is for you!

Wal-Mart has discontinued the sale of the $200 Linux PCs running the distribution gOS (based on the Ubuntu). The chain has stopped selling them in stores, but the gOS PCs will remain for sale at the Wal-Marts website www.walmart.com.

Personally I think this is a set back for Linux. Linux hasn't made a dent on the desktop market compared to Microsoft and Apple.

Read more at Yahoo news...
Posted by MadsRH at 9:36 AM No comments:

I'm working on a cover for Hardy Heron. I've made a preview of the inlay and the booklet.
I wanted to create a non-geek version (Why Ubuntu 8.04 needs better marketing...) - maybe the back of the booklet should have more "geeky" information, like: kernel 2.6.24, Xorg 7.3 etc.

Please post feedback if you have any comments or suggestions - thanks.

Ubuntu brainstorm has been launched! A site where people can add their ideas and vote for the entries they like.

The site is off to a good start. Within four days the site had:
Check it our yourself:
www.brainstorm.ubuntu.com/

For more brainstorm stats:
http://www.ndeschildre.net/2008/03/08/brainstorm-some-stats/
Posted by MadsRH at 4:46 PM No comments:

I want to share with you some of my wallpaper artwork for Ubuntu.

I've made some .Wav files for you to use as startup and exit sound. I tried to keep the African Ubuntu feel to the sounds. Please let me know what you think.

Get them here:
Alternative Ubuntu sounds as mp3.zip
Posted by MadsRH at 10:52 AM 2 comments:

Ubuntu Tweak is an application designed to config Ubuntu easier for everyone. This tool is perfect for Linux newbies and other non geeks.

It provides many useful desktop and system options that the default desktop environment isn’t provided.

This is my first post on my new blog. This page will feature my own contributes to Ubuntu, news, links and so on.
Looking forward to share my knowledge and opinions about Ubuntu.

Search Engine Optimization and SEO Tools
Posted by MadsRH at 10:26 AM No comments: