Return Of The Linux Action Show 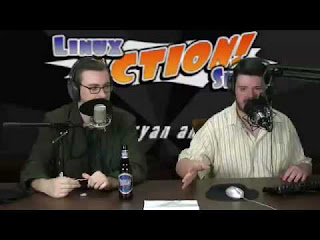 Bryan Lunduke, the Co-Host of audio and video shows at Jupiter Broadcasting, have revealed a secret that was (as he puts it) burning a hole in his… secret pocket!
On his blog, Bryan writes:


The Linux Action Show, the alpha and omega of Linux podcasts, is back.

This Saturday (February 20th) at 5pm (Pacific Standard Time) we will be recording the first episode of Season 11 of the Linux Action Show and, of course, the whole thing will be streamed live (in full video glory) over at Jupiterbroadcasting.com/live.

So, this Saturday, head over to JupiterBroadcasting.com/live and join in the live chat while we record the return of the best freaking show about Linux to ever grace this fine planet of ours.

I have nothing against The Computer Action Show, but this announcement is a really nice surprise. I'm very much looking forward to it's return with their 11th season after over 7 months off the air.
Posted by MadsRH at 10:48 AM