As we wrote earlier, it has been discussed if Plymouth will replace Usplash in Ubuntu 9.04. It turns out there will be no Plymouth for Ubuntu 9.04 as we were hoping for. Currently Plymouth is planed for Ubuntu 9.10 due to the lack of KMS in the kernel.

This means the current Usplash will remain as boot screen for Ubuntu 9.04. But hopefully there will be added a small change to the Usplash called Usplash Smooth. This is the original Ubuntu Usplash for Intrepid Ibex with an exciting twist! The progress bar in Usplash Smooth is time-based. It remembers the time of your previous boot/shutdown, and will smoothly increase the bar according to this time. Since the boot/shutdown times change very little, you will get a very precise bar with a very smooth animation showing exactly how much time is left.

The original Ubuntu Usplash progress bar didn't tell you much information. It moves in small/huge increments, and sometimes stands still for a few seconds.
Let's hope this little twist will be added in Ubuntu 9.04. Anyway, check out the project below, and post your opinions!

Today Mark Shuttleworth, the founder of Canonical, wrote a blogpost about the new notification feature in the upcoming Ubuntu 9.04.

Posted by MadsRH at 1:52 PM No comments:

Mark Shuttleworth, the founder of Canonical, recently wrote a blogpost titled "Morphing dialogs and the AJAX roadmap for Launchpad".

The user experience and design team at Canonical includes a few folks dedicated to web technology. At the moment, there is a substantial effort under way to reshape the Launchpad UI now that we have the core capabilities for cross-project bug tracking, code publishing and translation in place. We want to make it more obvious how to get something done - especially for new users - and we want to make it feel snappy and responsive when making small changes to your project data.

Over the next couple of months you will see pieces of this puzzle land in successive Launchpad monthly releases. In the video below you can see a couple of the key ideas.

Hylke Bons descripes himself as being a consistent user interface experience junkie. Back in November he posted a mockup of the Nautilus sidebar. The current sidebar looks very cluttered, so let's hope the gnome UI developers will clean it up a bit.

I know that you can report usability-bugs in the Gnome bugzilla - if this one isn't reported yet, it should be.
Posted by MadsRH at 10:53 PM No comments:

No Plymouth for Ubuntu 9.04

Plymouth has now been evaluated for Ubuntu as a replacement to the current USplash. Sadly Plymouth is not going to be default in Ubuntu 9.04, but we may get PPAs for people that are interested in trying it out and have the supported hardware. At the Ubuntu Developer Summit it was suggested that Plymouth should be default by 9.10 - when all the drivers are ready and all critical problems are solved. Plymouth uses kernel mode-setting to provide a cleaner boot experience with minimal flickering of the display since the display only needs to set its mode once.

Here is the video of the UDS session where you can see the discussion process in more detail: http://videos.ubuntu.com/uds/jaunty/Desktop/2008-12-11/morning-post-break/00001.ogv

Looks like there's a lot of great thing to look forward to in Jaunty +1 (Ubuntu 9.10). Although both the facebrowser and Plymouth won't make it into Jaunty, there's no doubt that Ubuntu, and Linux in general, is moving fast forward.
Posted by MadsRH at 12:15 AM 1 comment:

Teacher threatens to call the cops over Linux

If you haven't already read the crazy story that got over 2000 comments and ended up on the front page of Slashdot, read it here.

If you have, you should read the authors follow up titled "character assasinations ain't us"
Posted by MadsRH at 11:08 PM No comments:

The Ubuntu Developer Channel on YouTube has gone live again. Like last time the site will be stuffed full of videos about Ubuntu development. Ones again Tony Whitmore will be doing interviews throughout UDS this week. As we saw with Ubuntu Live in 2007 it is always interesting to get a glimpse into the future of Ubuntu.

Keep an eye on the Ubuntu Developer Channel this week, as more videos are added. There are only a couple so far, but there should be more soon!
Posted by MadsRH at 10:25 AM No comments:

The Ubuntu Desktop team outlined their plans for notifications in Jaunty. I think that Canonical’s work here is looking really good, and has a wonderful design. For those that are not at UDS, it is important to understand some of the changes that has been discussed. The first of which is the removal of “Actions” from notifications. This means that there will be no more buttons inside the notifications at all.
Notifications now are simply there to show you the data about what’s happening on your machine. This can happen in two ways; Synchronously, as you press a button like the volume or brightness controls, the notification comes up and shows you the change, and “normally”, how instant messengers like Pidgin with the libnotify plugin currently work.

Instead of having “Actions” inside of the notification window, they will be moved to a panel applet, which will allow you to get to the application in question by clicking it. There have been a lot of discussions on what this panel applet will be like, but it is probably the biggest missing component in the discussion so far, since we haven’t seen any prototypes on it, or what it’s interface will look like. The Design team that’s working on this seems to be doing so behind closed doors.

So, despite the conflict of the Bazaar vs the Cathedral in the situation we’re in, I’m feeling pretty good about the general work being done. I’m really hoping that I can be a part of it and it won’t be this cabal-like situation where I have to bring patches to Canonical’s door and sacrifice a goat in offering to the Gods of the New Notification Daemon. Or, you know, I could always get off my bum and send my resume in ;).

While this might not be terribly exciting to most, it does show a step forward in usability while adding some nice bling.

A Gobby document from the Desktop-GDM-upgrade session at UDS (witch is on it's third day today), showes that the facebrowser won't make it into Jaunty (Ubuntu 9.04), but it's planned for Jaunty +1. You will be able to change the graphics and layouts of the facebrowser in the theme, but the behaviors will be hard coded. It rarely happens that I mention games on this blog - actually the only post until today, has been the "Guitar Heros" clone post - but today Yo Frankie is available for download. The game is open-source and designed using Blender and the Blender Game Engine. Yo Frankie is an Apricot Open Game Project - even the character art and is available cross platform (at least Linux, Windows, OS X). The source-code, design files, and binaries are freely available.

Find more information on this new Linux game, at the Yo Frankie web-site.
Posted by MadsRH at 10:22 AM 2 comments:

Eavesdrop on the Jaunty UDS

If you didn't make it to the Ubuntu Developers Summit, here's some good news for you. There's many ways to follow what happens at UDS. As mentioned earlier we hope the Ubuntu Developer Channel on YouTube will be stuffed full of videos about the Ubuntu development and various interviews, but you can already follow what is happening at the summit and contribute comments and ideas to people at the summit.
Here is a list of links you want to visit:

1. The Scoop: The Ubuntu Wiki is the main source for the happen happens at the summit (https://wiki.ubuntu.com/UDS). Any news and changes will be posted there.

2. Schedule: The schedule for the summit can be found at http://summit.ubuntu.com. On the schedule you will be able to find links to the live audio/video streams from the conference and how to VoIP into the discussions.

3. Audio Live Stream : Listen to the live audio stream of the tracks at http://icecast.ubuntu.com/.

4. Micro-blogging: You can follow the feeds of the different tracks and people at UDS (http://whoisi.com/e/uds-jaunty). Or you can follow http://identi.ca/ubuntudevelopers on identi.ca.

5. IRC: Join the channel #ubuntu-devel-summit or #uds on the Freenode IRC network (chat.freenode.net).

6. The Planet: Planet Ubuntu (http://planet.ubuntu.com) aggregates feeds of Ubuntu Member. The Planet will have a ton of information on UDS and plans for Jaunty.

7. Forums: People from the summit will be following thread in the Jaunty Jackalope Testing and Discussion forum. Use the tag of UDS in the forums if you make a thread about the summit.

How to get your TabletPC working on Ubuntu Intrepid

Ugo Sangiorgi did a nice blog post on his OmniModeling project.

Right now OmniModeling is able to recognize multiple strokes as a gesture, so the user is able to draw dashed connections and composite figures as well. And it works with Compiz:

Read his blog post "How to get your TabletPC working on Ubuntu Intrepid (+Wubi and Compiz)" here...
Posted by MadsRH at 4:16 PM 1 comment:

It's always nice when people give you positive feedback on your work and contributions, but I guess one of the biggest gestures is when people actually use your work. This has been the case before, with the return of the Hardy Heron cover as we saw back in June, or the Ubuntu Wanted website layout.

This time, I'm proud to see my own artwork for the danish Ubuntu 8.10 Release Party being used. I wasn't attending the release party myself, but I found these pictures from the event. 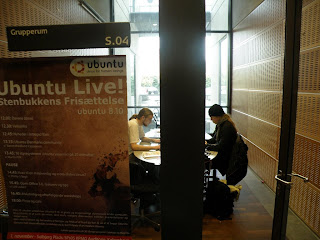 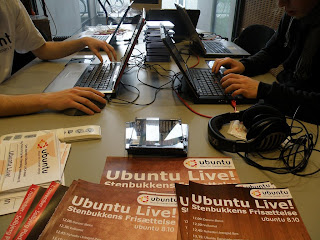 We're approaching the Ubuntu Developers Summit (8th - 12th December), witch always is the highlight of many Ubuntu contributors calendars. Like last time, we hope the Ubuntu Developer Channel will be stuffed full of videos about Ubuntu development and various interviews.

At the beginning of a new development cycle, Ubuntu developers from around the world gather to help shape and scope the next release of Ubuntu. The summit is open to the public, but is not a traditional conference, exhibition or other audience-oriented event. Rather, it is an opportunity for Ubuntu developers - who usually collaborate online - to work together in person on specific tasks.

...But UDS is way more than just sessions. It is about people. UDS brings together a fascinating, inspiring and indelibly social group. There is a fantastic atmosphere at UDS and a very real sense of community. We work hard to try and make UDS feel as welcoming and open to ideas and discussion as we can. It is an opportunity to re-affiirm old friendships and make new ones. Every day we not only work hard together, but we play hard too. Anyone who has been to a UDS will be well aware of just how physically draining it can be: long days full of discussion and long evenings of socialising make for a pretty tiring week. I think my coffee intake increases as the week progresses...

As we have already confirmed, Plymouth will be discussed at the UDS, along with a lot of other interesting discussions.

The long-awaited cross-platform media player Songbird officially reaches its 1.0 release today. The open-source application is built on the same platform as Firefox and promises to bring exciting new innovations to the software jukebox market. Like Firefox, Songbird is extensible, meaning that users can customize the look, feel, and features of Songbird to their heart's content.
Perhaps this is the iTunes killer you've been waiting for?

Grab it here: http://getsongbird.com/
Posted by MadsRH at 11:57 PM No comments: