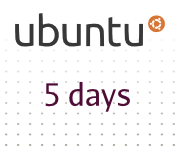 As usual Matthew Nuzum, the Ubuntu webmaster, has called out for help in creating a beautiful countdown banner for Ubuntu 10.04.

Unlike previous times the banner will not be launching with the beta release. There are two betas this period and the team is aiming at releasing the countdown in between the two. The material from the newly announced Ubuntu Branding will give the artists new opportunities in the form of a new color scheme, new logo and new font.

There's already a few submitions on the wiki. Have you submitted your suggestion?